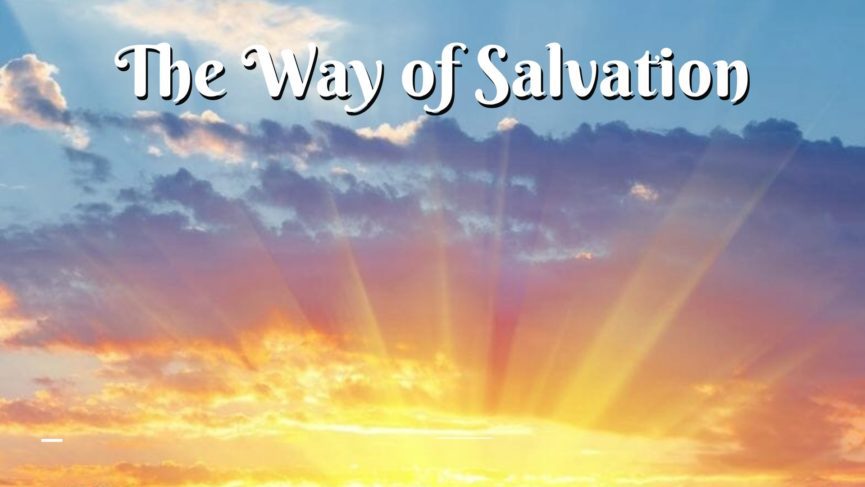 Today’s message is about how we understand the way or process of salvation in the Wesleyan tradition.

Different Christian traditions emphasize various aspects of this process. In some, you must say a particular prayer; in others, you must be baptized by the Holy Spirit and have a sign that demonstrates it. And, in some others, you must pay the price, either through suffering or good works. While all of them try to understand and explain how we are saved, the differences in interpretation may be very significant—even to the point of being quite opposing.

The Scripture we are studying to help us understand the process of salvation is Acts 8: 1, 26-38,

“Now those who were scattered went from place to place, proclaiming the word.

Then an angel of the Lord said to Philip, “Get up and go toward the south to the road that goes down from Jerusalem to Gaza.” (This is a wilderness road.) So he got up and went. Now there was an Ethiopian eunuch, a court official of the Candace, queen of the Ethiopians, in charge of her entire treasury. He had come to Jerusalem to worship and was returning home; seated in his chariot, he was reading the prophet Isaiah. Then the Spirit said to Philip, “Go over to this chariot and join it.” So Philip ran up to it and heard him reading the prophet Isaiah. He asked, “Do you understand what you are reading?” He replied, “How can I, unless someone guides me?” And he invited Philip to get in and sit beside him. Now the passage of the scripture that he was reading was this:

“Like a sheep he was led to the slaughter, and like a lamb silent before its shearer, so he does not open his mouth. In his humiliation justice was denied him. Who can describe his generation? For his life is taken away from the earth.”

The eunuch asked Philip, “About whom, may I ask you, does the prophet say this, about himself or about someone else?” Then Philip began to speak, and starting with this scripture, he proclaimed to him the good news about Jesus. As they were going along the road, they came to some water; and the eunuch said, “Look, here is water! What is to prevent me from being baptized?” He commanded the chariot to stop, and both of them, Philip and the eunuch, went down into the water, and Philip baptized him.”

The book of Acts is the story of the birth of the church. In the first chapters, we read about how the disciples received the Holy Spirit and were empowered to preach the gospel of Jesus. By chapter eight, the church was growing through powerful revivals where people received the gospel by faith and were baptized.

In this passage, we read about the apostle Philip and a eunuch man. First, Philip spoke to multitudes in Samaria, but then he was sent down to “the south to the road that goes down from Jerusalem to Gaza.” While on the way, he found someone to whom he was to witness about Jesus being the Christ.

As we read this story, we can confidently assume that the eunuch was interested in the religion of the Jews as he had come to Jerusalem to worship. On his way back, he was reading from the prophet Isaiah. In other words, he sought to understand the Jewish religion and his faith. At this point, Philip, being led by the Spirit, approached him and asked him, “Do you understand what you are reading?” He replied, “How can I, unless someone guides me?” After this, Philip explained everything to him, and he understood and believed in Jesus as the Christ and asked to be baptized.

This man was seeking understanding about his spiritual wellbeing, and he found it. He did not say a particular prayer, give a gift, or sacrifice to attain salvation; instead, as he understood, he earnestly believed in Jesus as the Christ and offered himself to God through baptism.

John Wesley, the founder of the Methodist movement that later became the Methodist church, in his sermon, “Scripture Way of Salvation,” explains that the first step into salvation (justification) is to have faith. For Wesley, although God’s grace works in us even before we may have faith, salvation depends on it.

The apostle John gives us an insight into this by saying,

John explains that salvation is attained by faith and that once we believe in Jesus, we experience salvation and a new life in God. In other words, salvation is not the end but the beginning of a life lived as children of God.

Consequently, faith is required for salvation in our Wesleyan understanding of the process of salvation. This means that faith is the sole condition for salvation; no good works, sacrifices, or any proof of having a spiritual gift are required. And this was the experience of the eunuch; once he understood, he believed. Faith is all he needed to experience the gift of a new life—and he did.

Now, what are we saved from, and what for? The Bible explains how sin and evil came into the world. The first humans, Adam and Eve, rejected God and were led instead by vanity and selfishness—only to learn soon that that would lead them to lose everything, including their lives. After that, their children, Cain and Abel, were also contaminated by sin and evil, and one killed the other out of jealousy. No greater horror than a parent can imagine.

After that, we find people behaving in evil ways against each other. Sadly, we know what this looks like because we continue to see that kind of behavior: abuse, oppression, injustices, killings, and so on.

So, we are saved from anything that is against life and rejects the moral goodness of God; and we are saved to live as beloved children of God full of life. This means that in salvation, we pass from darkness to light, from damnation to redemption, from fear to love. In this sense, salvation is the awakening of our whole being to the reality of God and God’s kingdom and the welcoming of both into our lives because we eagerly want a good and new life away from darkness and evil.

John Wesley explained this issue in one of the sermons he preached in 1742 at Oxford University. His sermon, “Awake, Thou That Sleepest,” described the need for human beings to be aware of their sinful nature and God’s love and grace to consciously be able to turn away from sin and move towards salvation in and through Jesus Christ. Wesley’s basic statement in this sermon is that all people are unaware sinners without the awakening that comes through faith in Christ. Once we realize the love of God for us and understand the grace that has been given to us despite all the wrong things we have done, that is the moment we are awakened, saved, and revived through faith. (Exactly what happened to the eunuch.)

But why faith? Faith gives us the power to see the beauty and love of God and understand there is more to life than just what we have. Faith also makes us vulnerable to seeing our brokenness, sinfulness, and the need for such beauty and love. And last, faith leads us to the grace we need to be able to reconcile God’s love with our brokenness and sinfulness. In other words, faith opens our eyes to see God and ourselves the way we are, helps us be honest about the things we do wrong and need healing from, and holds us in the arms of grace to know we are loved and welcomed.

The story of the eunuch man shows us this process and how God works this salvation in us. God’s grace pursued him all his life before he knew or understood God. But once he did, once he met Jesus, he believed, offered himself humbly, and was justified, forgiven, and born again as a child of God.

As we can see, in our Wesleyan understanding, the process of salvation is not reduced to a single prayer or any particular act of worship or membership in a church as in “If you want to be saved, you need to do this or that.” Although prayers and acts of worship could be powerful catalysts, our realization of God’s love and grace in our lives is a lifelong journey that requires an honest and vulnerable longing for God on our part. This is what happened to the eunuch as he longed for God so much he was seeking him everywhere he went.

I have shared with you before my story of faith and how and when I knew I was saved. So, here it goes again for good measure.

When I was a kid, my grandmother would take my brother and me to church regularly. My mom worked a lot to provide for us as a single mother. Growing up in church, I attended Sunday School classes, Vacation Bible School, and church services. Because of that, I learned the stories of the Bible. Those teachings gave me a moral compass that guarded me when I became a teenager.

However, it was not until I was 17 that I knew I was saved. One night in October, around 10 p.m., I was coming home driving with my uncle in his car, and we were talking about the meaning of Jesus dying on the cross. That night, my heart was “strangely warmed” when I realized Jesus’ love for me: “He loves me!” I told myself in my heart. I knew I did not deserve God’s love, but I also knew it was available to me if I welcomed it. And I did. Not because of fear of hell or punishment, but because of God’s goodness and love (that’s the beauty of God). And once I said “Yes!” to God, I knew I was given new life right there. God’s grace told my heart, “You are forgiven, loved, and saved!”

I am before you today because, as a child, I was nurtured in the church as a disciple of Jesus by good people, starting with my grandmother. That was prevenient, pursuing grace. Then my uncle helped me understand who Jesus was and what he did, and I believed. That was justifying, forgiving grace. And as I have continued my faith journey to this day, with ups and downs, I am committed to God with all of you, the church. That is sanctifying grace, love through grace.

So, I know I am saved because I want God in my life, reject sin and evil, believe in Jesus, and hope for eternal life. I am not the product of a single act of worship, prayer, or anything else, but the fruit of God’s grace through many people over many years.

Do you know if you are saved? Do you want to be saved? Then, I invite you to welcome God’s grace and forgiveness and offer yourself through faith to Jesus Christ.

Today is a good day for an awakening and revival in your life; all you have to do is believe and offer yourself to God eagerly.