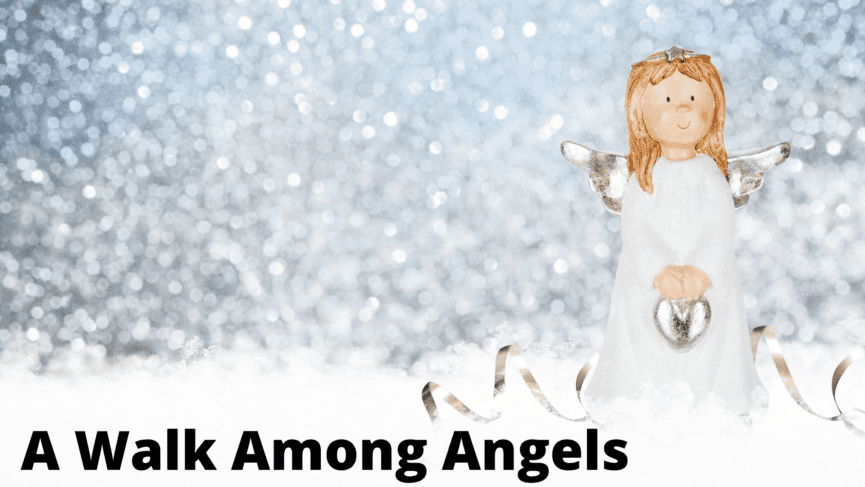 Last week, we started our Advent Series looking at the Christmas Story through the experiences of the different characters in the story. We talked about the animals in the Christmas story and how they were the first witnesses of the birth of Jesus and that the first sounds Jesus heard were from the animals along with him in the stable he was born in. We learned that all creation longs for healing and salvation as much as we humans do; hence, God saves us all through Jesus Christ.

Today, we are talking about angels, who they are, what they do, and how we may experience them in our lives. Let’s read the story of Christmas from Luke 2: 1-20,

In those days a decree went out from Emperor Augustus that all the world should be registered. This was the first registration and was taken while Quirinius was governor of Syria. All went to their own towns to be registered. Joseph also went from the town of Nazareth in Galilee to Judea, to the city of David called Bethlehem, because he was descended from the house and family of David. He went to be registered with Mary, to whom he was engaged and who was expecting a child. While they were there, the time came for her to deliver her child. And she gave birth to her firstborn son and wrapped him in bands of cloth, and laid him in a manger, because there was no place for them in the inn.

In that region there were shepherds living in the fields, keeping watch over their flock by night. Then an angel of the Lord stood before them, and the glory of the Lord shone around them, and they were terrified. But the angel said to them, “Do not be afraid; for see—I am bringing you good news of great joy for all the people: to you is born this day in the city of David a Savior, who is the Messiah, the Lord. This will be a sign for you: you will find a child wrapped in bands of cloth and lying in a manger.” And suddenly there was with the angel a multitude of the heavenly host, praising God and saying,

“Glory to God in the highest heaven, and on earth peace among those whom he favors!”

When the angels had left them and gone into heaven, the shepherds said to one another, “Let us go now to Bethlehem and see this thing that has taken place, which the Lord has made known to us.” So they went with haste and found Mary and Joseph, and the child lying in the manger. When they saw this, they made known what had been told them about this child; and all who heard it were amazed at what the shepherds told them. But Mary treasured all these words and pondered them in her heart. The shepherds returned, glorifying and praising God for all they had heard and seen, as it had been told them.

This reading is the story of the first Christmas. Here, we learn about Mary and Joseph traveling to Bethlehem to register for a census. During this trip, their baby was born in Bethlehem. Since everyone was coming to town due to the census, Joseph and Mary could not find a place to stay but a stable with animals.

Now, as all this was taking place, Luke tells us that God sent angels to announce the birth of Jesus to shepherds that were nearby by telling them, “Do not be afraid, I am bringing you good news of great joy for all the people: to you is born this day a Savior, who is the Messiah, the Lord.”

As I read this, I imagine the angels desperate to tell us what they have just learned from God and were told to announce to us. They just could not help themselves to tell us of the greatest joy and news they had been waiting to hear too. I can picture them rushing with lightning speed to meet the shepherds in the fields and tell them all about the birth of Jesus, the Savior of all creation. Just as the shepherds were surprised and amazed by the news, so were the angels—they had this “fresh out of the oven” message to deliver.

Now, let me ask you, what is an angel? The Bible teaches us angels are distinctive creatures from human beings, meaning humans don’t become angels and angels don’t become human. There are also more than one kind of angels, and they serve different purposes and have unique characteristics and virtues. For example, the Bible mentions Seraphim, Cherubin, Archangel, and a few others. Some are messengers, some protectors, but all of them rejoice as much as we do in knowing and worshiping God.

However, all of them have in common free will and choose to serve God. That is why when they came to the shepherds to announce the news of great joy, it is said that “a multitude of the heavenly host praising God” proclaimed, “Glory to God in the highest heaven, and on earth peace among those whom he favors!” This “multitude of the heavenly host” is a whole lot of angels celebrating and rejoicing because the time had finally come when God would save all of creation—and they got to tell all about it first.

Now that we know what angels are and what are not, have you seen one? Have you experienced the presence one? I think I have—no, I am pretty sure I have, and more than once actually.

Here is the story. Once upon a time… (just kidding). One day, I was walking in a park praying and conversing with God about what was happening to me. During that time, I was experiencing a revival in my faith and was passionate about serving God, so I was seeking God in solitude. I think I was 17 years old then. I remember it was a cold, cloudy day. There was no one near me, I could not see anyone as far as my sight reached, and it was quiet. Maybe I was there for 10 minutes, perhaps an hour—I can’t recall because what happened to me disconnected me from reality for whoever long.

So, as I was praying and thinking about my newfound faith (meaning, faith just got real) with joy and full of excitement, I asked God: “If you want me to serve you, give me a sign. If this is you putting these desires in my heart, show me.” I am pretty sure I said a whole lot more, but that was the basic conversation.

And then, something happened, as I was praying in my mind and mumbling words as whispers someone pushed me forward, like really hard (let me show you…). I can’t remember what I said, but I was like, “Hey, watch out!” I turned and looked all around me, and there was no one. I could not understand what had just happened but quickly came to realize that God was answering my prayer, and I knew I was not alone. I am confident as the sky is blue and water is wet that that was the angel of Lord—or a friend of his, for sure someone from God.

Picture me for a moment: I am there asking for certainty about decisions I want to make about my life and future, and God thought it was a good idea to send someone to push me around, to push me forward. And it was. Just imagine you asking, “God, do you want me to do this,” and God is like, “Yes (pushing you forward hard!”) Well, I think it is working great so far. I have a great life. All the ups and downs don’t even come close to the joy of following my faith.

I know some of you have had unexplainable experiences as well, and you were certain it was God or an angel with you or with someone you care about. I have heard stories of people seeing visions, feeling a pad on the back, or a hand on the shoulder; other times, people were kept safe against dangerous conditions or given strength while struggling with fear, confusion, and desperation.

What all of these experiences have in common is that they happened in a time of great need, and they gave us encouragement, hope, and confidence about our well-being and future. And that is exactly what happened to the shepherds and to Mary and Joseph in their encounters with angels.

I don’t know if I am right when I say this, but I believe unless we are seeking God’s will for our lives and building God’s kingdom, we won’t have these kinds of supernatural experiences in our lives. Every time I had an otherworldly encounter with God, I was simply seeking him—nothing else and not asking for anything for myself. My heart was willing to listen and receive.

So, knowing all this, that angels are real and we may walk among them, we learned they come to give us encouragement, hope, and strength, and they come to those who have a willing heart, how willing are you to receive the news of great joy about Jesus, the Son of God, coming to give you life and a promise of eternal hope?

If you are willing to seek Jesus like those shepherds, you will find him. Think of this “seeking” as when you were a child and you were seeking a toy in your room and could not find it, only to ask your mom or dad for help and they would find it “magically.” I mean, were you really seeking the toy or just gazing around your room? We don’t need “magic” to find God, just a willing heart seeking for him—the Bible says that we will always find him when we seek God.

That happened to me when I walked among ageless without realizing it. I found God and my purpose when I prayed saying, “I am yours, use me!”

My friends, God is found when God is sought. So, go seeking for God, and you will find him and have a great life—whether you get to see or experience angels or not.