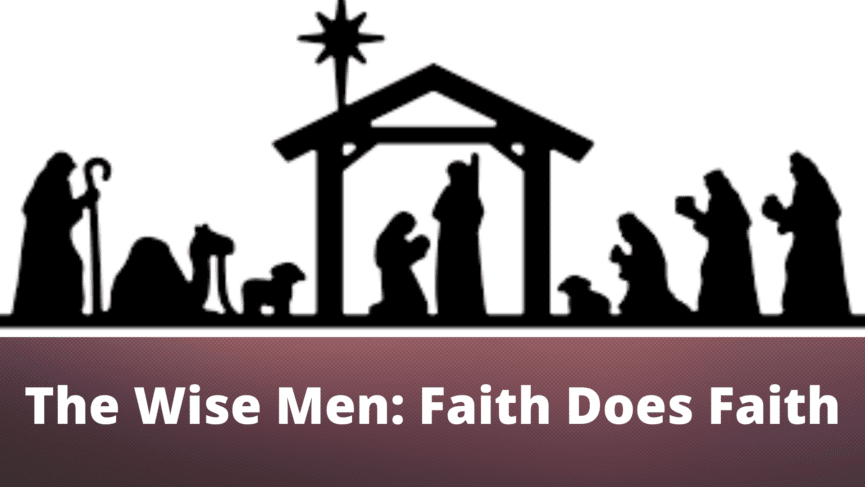 What characters come to mind when you hear the phrase or title of “People of Faith in the Bible”? Abraham (has to be on the top 1 for sure), Noah, Moses, King David, prophets like Elisha, Mary mother of Jesus, or any of his disciples for sure. But what about the wise men from the East that traveled a long distance trusting a sign on the sky as they were seeking the promised King of the Jews? Have you ever thought of them as great examples of faith?

Let’s hear their story and see what they have to teach us today,

“In the time of King Herod, after Jesus was born in Bethlehem of Judea, wise men from the East came to Jerusalem, asking, “Where is the child who has been born king of the Jews? For we observed his star at its rising, and have come to pay him homage.” When King Herod heard this, he was frightened, and all Jerusalem with him; and calling together all the chief priests and scribes of the people, he inquired of them where the Messiah was to be born. They told him, “In Bethlehem of Judea; for so it has been written by the prophet: ‘And you, Bethlehem, in the land of Judah, are by no means least among the rulers of Judah; for from you shall come a ruler who is to shepherd my people Israel.’”

“Then Herod secretly called for the wise men and learned from them the exact time when the star had appeared. Then he sent them to Bethlehem, saying, “Go and search diligently for the child; and when you have found him, bring me word so that I may also go and pay him homage.” When they had heard the king, they set out; and there, ahead of them, went the star that they had seen at its rising, until it stopped over the place where the child was. When they saw that the star had stopped, they were overwhelmed with joy. On entering the house, they saw the child with Mary his mother; and they knelt down and paid him homage. Then, opening their treasure chests, they offered him gifts of gold, frankincense, and myrrh. And having been warned in a dream not to return to Herod, they left for their own country by another road.”

As the story of Christmas keeps unfolding, now we learn that people from faraway East lands were studying the coming of the promised Messiah. These “wise men” were not Jews but gentiles that studied ancient wisdom and astrology. In their search for truth, they found the prophecy regarding the one who would come from God to bring salvation to the world. They learned there would be a sign on the sky, a star, that would point the way and place of the birth of the Savior, and they followed it. When they arrived at Jerusalem and presented themselves before King Herod to inquire about the birth of the baby King, they explained to Herod what they knew, and the chief priests and scribes confirmed it by telling him,

“[The Messiah was to be born] in Bethlehem of Judea; for so it has been written by the prophet: ‘And you, Bethlehem, in the land of Judah, are by no means least among the rulers of Judah; for from you shall come a ruler who is to shepherd my people Israel.’”

These wise men were believers in the Jew King, the promised Messiah, and had studied his prophecies to such extent that they were even more aware of his birth than the chief priests and scribes in all Jerusalem. These men were not only wise but full of faith and hope; otherwise, how can we explain their commitment to their journey? I see a lot of the faith of Abraham in them when God called him to go after the promised land. In this case, however, it was the promised Savior.

Who are these men? What do we know about them? They are described as “wise,” which means they were studied persons held in high esteem and taken seriously. Just by the fact that King Herod welcomed them himself tells us enough to understand they were very important individuals. We also know they were from out of town, way out of town. The text does not explicitly say where they came from; it just says from the East, probably from an area in either Iraq, Iran, Saudi Arabia, Yemen, or northern Syria.

Another thing that we know is that although they are often called the “Three Kings,” the Bible does not say how many there were or that they were kings. Did you know that? The gospel never mentions the number, and it only says “wise men.” Still, most Christians traditionally assumed them to have been three in number based on the statement that they brought three gifts. And their kingship is historically linked to Isaiah 60:1-6, which refers to “kings [coming] to the brightness of your dawn” bearing “gold and frankincense.”

So, here we have however many wise king men from somewhere in the East, believing and trusting wholeheartedly in what was said about this baby King, Jesus. With nothing more than each other’s company, a prophecy regarding a foreign king, and a sign in the sky, they risked everything in their search for Jesus.

As we consider all this, it is important to note that no one else in Jerusalem or anywhere else was paying attention to the fulfillment and birth of the Messiah. Matthew tells us that the chief priests, the scribes, King Herod, and everyone else in Jerusalem were “frightened” when they learned what these men were searching for. In other words, very few people were paying attention to what God said and was doing.

But these wise men did, and their example is one of a remarkable faith that we need to learn from. When they arrived in Bethlehem, they “fell down, and worshipped him.” They did not hear Jesus teach or do miracles to persuade and convince them. There was nothing to suggest Jesus’ divinity, and yet those men fell down and worshipped Jesus. They believed in Christ when they had never seen him. They saw nothing but a newborn needing a mother’s care like any one of us would as babies. And yet when they saw that infant, they believed he was the divine Savior of the world and worshipped him.

The faith of these men deserves to be placed side by side with that of Abraham and the thief on the cross that asked Jesus to remember him.

What is the meaning of all this? As much as back then, many people today are not paying attention to what God says, does, and the signs he gives us to guide us in our lives—far too many don’t even care, or worse, are threatened by it. Still, there are those who believe and find God just as the shepherds and the wise men did.

As we start a new year, most people have goals and resolutions to improve health, finance, or relationships, which are great and commendable—so, please do get them. But, what if we also decide to pay more attention to God this year, to listen deeply from the heart? What would happen to us if we trust and follow God’s counsel this year and act on those beliefs? How would that look like? It would look like regularly participating in church and worship, praying, giving, studying the Bible, and getting involved in acts of service and ministry to others.

I finish with this. I told you my story of how I was called to ministry. I was raised in the church and knew the Bible and all the stories in it. But it was not until I realized the significance of my belief (meaning that it was not an accessory like a cross on my neck or a feel-good kind of thing to do whenever I had time), the value and purpose of my life, and what God had done to give me hope through Jesus Christ, that I said for the first time “Yes!” to my faith and started doing what faith does (church, service, worship, giving, praying, studying).

I never rejected my faith before, but also, I never understood why I believed what I did until that moment when I was 17 years old and grasped the love of God for me and said, “I am yours.”

My prayer is that we are like that, pay attention to God, and say “Yes, I am yours.” Faith is a blessing. Believe.