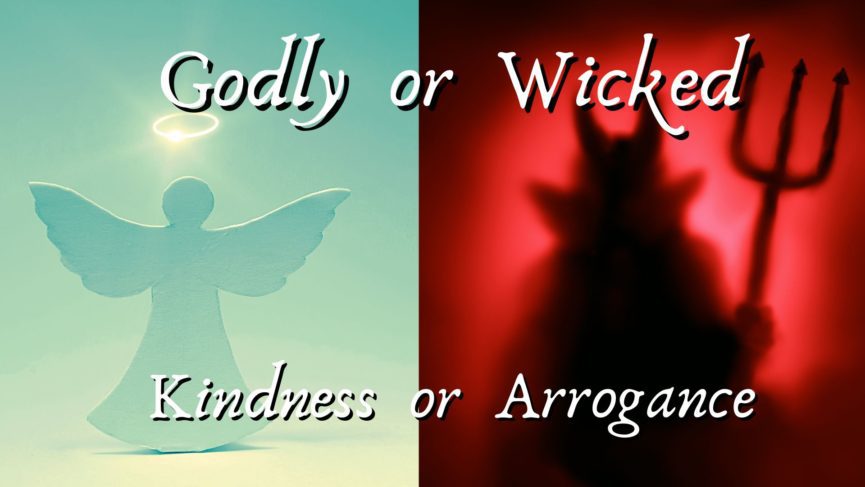 Today is the fourth message in the series “Godly or Wicked.” So far, we have explored some distinctions between what constitutes godly and wicked. Here are some highlights from the previous messages

Most human beings are good. They care about their family and friends, respect the right to life of other human beings, and contribute to their community’s safety and wellness, whether passively or actively. Of course, we are still sinful, and sometimes we may say and do wrong things and cause harm, but that is not the driving force of our nature.

Then there are bad people. In my opinion, they are very few, but they are very real. They willfully desire to hurt and abuse others for their benefit or pleasure. I explained that evil people plan to harm, abuse, and get whatever they want with no moral constraint. The Book of Psalms 10 describes these people: they watch, lurk, seize, and drag their victims in their net.

All this is very important to know and understand, even more so as we may care to teach our children to be good people and warn them against behaviors that could hurt them or others.

Today’s topic is Kindness vs. Arrogance.

Let’s open with the question: What is kindness? A few days ago, I came across a video of kids playing baseball. What happened during the game is a great example of what kindness is. Watch this: https://www.youtube.com/watch?v=XED8sHBF3L8

Several things are happening in this incident: The catcher checking on the injured batter, the pitcher’s obvious dismay at potentially harming someone else, and the batter’s forgiveness and encouragement for him. That is what kindness looks like and what it does. Every one of them showed a class act of sportsmanship.

According to the Tyndale Bible Dictionary, kindness is the state of being that includes the attributes “of loving affection, sympathy, friendliness, patience, pleasantness, gentleness, and goodness.” In addition, kindness is a quality shown in how a person speaks and acts. So, by definition and practice, kindness is not just an emotion or feeling but a choice to look after the well-being of others (like the kids in the video). Kindness is what moves us to be better human beings and remember that we were created for good.

On the opposite side to kindness, there is malice, cruelty, and animosity, all coming from a place that devalues others as it exalts oneself over them.

For example, an arrogant person does two things: thinks others are of lesser value and considers themself superior, as in more deserving and with privileges. If kindness leads to looking after those in need, arrogance leads to using others for our wants.

There is a story in the Hebrew Scriptures of a king that was good and kind but ultimately turned evil and arrogant. This is the story of king Uzziah, 2 Chronicles 26, 1-5, 16-21

“Then all the people of Judah took Uzziah, who was sixteen years old, and made him king to succeed his father Amaziah… and he reigned fifty-two years in Jerusalem. He did what was right in the sight of the Lord, just as his father Amaziah had done. He set himself to seek God in the days of Zechariah, who instructed him in the fear of God, and as long as he sought the Lord, God made him prosper.

But when he had become strong he grew proud, to his destruction. For he acted unfaithfully toward the Lord his God and entered the temple of the Lord to make offering on the altar of incense. But the priest Azariah went in after him, with eighty priests of the Lord who were men of valor; they withstood King Uzziah and said to him, “It is not for you, Uzziah, to make offering to the Lord, but for the priests the descendants of Aaron, who are consecrated to make offering. Go out of the sanctuary, for you have acted unfaithfully, and it will bring you no honor from the Lord God.” Then Uzziah was enraged. Now he had a censer in his hand to make offering, and when he became enraged with the priests a defiling disease broke out on his forehead… When the chief priest Azariah, and all the priests, looked at him… [t]hey hurried him out, and he himself hurried to get out, because the Lord had struck him.

King Uzziah had a defiling disease to the day of his death, and being diseased lived in a separate house, for he was excluded from the house of the Lord.”

King Uzziah was one of the better kings of Judah. For years, he honored God and was blessed. As it says, “as long as he sought the Lord, God made him to prosper.” But unfortunately, Uzziah didn’t end well despite being a good king for most of his reign. He died a leper and a disgrace because he could not handle his success and power.

2 Chronicles tells us what led to Uzziah’s demise, “But when he had become strong he grew proud, to his destruction.”

Uzziah grew arrogant. This is clearly seen in his defiance of the order of God in the temple when it says, “He acted unfaithfully toward the Lord his God and entered the temple of the Lord to make offering on the altar of incense.”

It was not Uzziah’s place nor he had the authority to go into the temple and act as a priest to himself. Although the priests tried to stop him, he insisted on forcing his way as he pleased. He was not humble to listen to reason but became enraged with the priests as it says, “The priest Azariah said to him], “Go out of the sanctuary, for you have acted unfaithfully, and it will bring you no honor from the Lord God.” Then Uzziah was enraged.”  His arrogance led him to believe he could do whatever he wanted and break the rules because he thought of himself as above them—he had no moral or spiritual constraint at this point. He might not have been a full-on wicked person yet, but his choices were strongly inclined to evil.

This is just one story from a very old book, but so true in every way. This story is as true and real today as it was back then. We see a king who started right and with the blessing of God but faltered and failed along the way. Even when confronted with the truth of his sin, he refused to repent, doubling down with anger and threats. That is the nature of arrogance.

This story shows us how arrogance leads to anger, contempt, animosity, and, ultimately, self-destruction. All the years that king Uzziah was a good king ended with him being arrogant. If his parents could have seen him, they wouldn’t have recognized him. He had changed. His success spoiled his character, and he became arrogant, self-centered, and self-served. What a tragedy indeed.

Proverbs 16:17-18 explains this and the consequences of arrogance, “The highway of the upright avoids evil; those who guard their way preserve their lives. Pride goes before destruction and an arrogant spirit before a fall.” Basically, Uzziah’s story, right? He preserved his life for a long time until he did not and fell.

The Bible teaches and encourages us to the opposite: lovingkindness, that is, to incline oneself to be gracious to others. Being arrogant and having the attitude of “I’m better than you” destroy us and our relationships with others, but lovingkindness is like what Jesus said, “[W]hoever wishes to become great among you must be your servant…” (Mark 10:43)

The apostle Paul echoed these same sentiments in his letter to the church in Philippi: “Do nothing from selfish ambition or empty conceit, but in humility regard others as better than yourselves.” (Philippians 2:3).

This is the Christian behavior we are called to have: lovingkindness, a disposition to be a blessing to others, just like the kids we saw in the video playing baseball. (Let’s watch it again for good measure: https://www.youtube.com/watch?v=XED8sHBF3L8)

Here is the invitation and good news: take care of yourself and be mindful of not letting arrogance take over you, for it will destroy you and those whom you love. Instead, live a life walking in love, following Jesus’s footsteps of lovingkindness, like those kids caring for each other.

As the apostle Paul said, “Be kind to one another, tenderhearted, forgiving one another, as God in Christ has forgiven you.” (Ephesians 4:32)