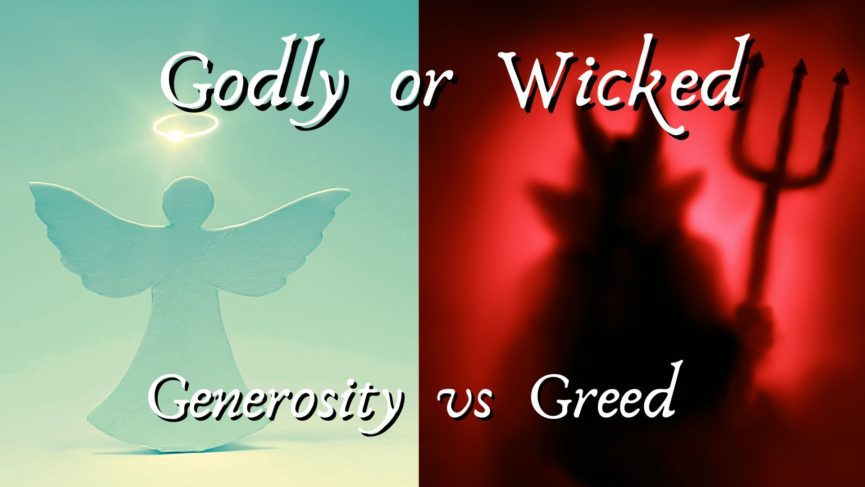 Today is the third message in the series “Godly or Wicked.” This series aims to help us distinguish between what is good and what might be evil. The purpose is to warn against what leads to evil and encourage to follow what leads to goodliness. This series is not about becoming judgmental (far from it!) but wise in discerning behaviors that may be inclined to evil and behaviors that lead to godliness—whether in other people or us.

In the first message, I defined what evil looks like by quoting Psalms 10, where wickedness is described through specific behaviors: The wicked persecute, scheme, and ambush, they boast of the evil desires of their heart and are greedy and arrogant. Verse 9 says, “Their eyes stealthily watch for the helpless; they lurk in secret like a lion in its den; they lurk that they may seize the poor; they seize the poor and drag them off in their net.”

What a powerful image to describe the character and behaviors of evil: they watch, they lurk, they seize and drag their victims in their net. They willfully persecute and scheme to get what they want from whoever they want. They curse, deceive, oppress, and kill as the devil does (John 10:10), and they plan for all of it to surprise and overcome their victims.

Then, last week, our wonderful office manager Ms. Michele Sisson shared an encouraging message about godliness with us. Ms. Sisson explained her experience with this church in her four years on staff here. She emphasized some aspects of the church’s behavior that have blessed her deeply: generosity, kindness, and compassion.

Michele shared with us stories about how the church always is willing to provide to those in need, how it is kind in its demeanor and is moved by compassion even when there are disagreements. Of course, sometimes that may not be too obvious or we forget, but those characteristics ultimately define the character of this congregation.

For this third message, the topic is generosity vs greed. The Scripture is Luke 12: 13-15,

Someone in the crowd said to him, “Teacher, tell my brother to divide the family inheritance with me.” But he said to him, “Friend, who set me to be a judge or arbitrator over you?” And he said to them, “Take care! Be on your guard against all kinds of greed, for one’s life does not consist in the abundance of possessions.”

This text tells us a story and a parable. The story relates to two brothers fighting over an inheritance. The one in the crowd asked Jesus, “tell my brother to divide the inheritance with me.” His request was not unreasonable. As far as I know, the other brother was dishonestly holding everything for himself. On one hand, we have a man who is fairly requesting the money that belongs to him. And on the other hand, we have his brother trying to keep everything to himself.

So, this man understandably had a grievance against him and asked Jesus for help because it was not uncommon for rabbis to be asked to rule in family disputes. However, Jesus refused to become involved and replied, “Friend, who set me to be a judge or arbitrator over you?” In other words, Jesus wouldn’t rule. Nevertheless, he noticed a lust for wealth at the heart of this family feud and used the opportunity to teach a lesson about greed and generosity.

In this story, we can get a sense of what greed is capable of doing to a person or relationship. I am sure the parents intended for the inheritance to be a blessing to their children, but it was destroying them instead. Greed does this because it is like a snake that wants to swallow an elephant. “Nothing is enough! I want more! I want what someone else has!”

Hence, greed is self-destructing because it corrupts behavior as it justifies the means to get whatever we want at all costs without regard for others. Like the brothers from our story, people forget how much they used to care for each other and are blinded by wanting more. People can even kill each other over issues like this.

But then Jesus explained the nature of greed with a parable in the following verses (16-21),

Then he told them a parable: “The land of a rich man produced abundantly. And he thought to himself, ‘What should I do, for I have no place to store my crops?’ Then he said, ‘I will do this: I will pull down my barns and build larger ones, and there I will store all my grain and my goods. And I will say to my soul, Soul, you have ample goods laid up for many years; relax, eat, drink, be merry.’ But God said to him, ‘You fool! This very night your life is being demanded of you. And the things you have prepared, whose will they be?’ So it is with those who store up treasures for themselves but are not rich toward God.”

The premise of this parable is about a rich man who had such a huge harvest that his barns couldn’t contain it. At first sight, he did the right thing and built more and larger barns. Then again, his barns became full, and he felt so confident about his future and ability to help himself. Nonetheless, God called him a fool. Why? Because he lived for wealth, dreaming about how wonderful his life was and how much he was going to enjoy it without knowing he would die the next day. His wealth could buy him larger barns but not guarantee him life. He ended without even one day to relax in his affluence. That is what made him a fool.

Through this parable, Jesus was teaching a powerful lesson against the grip of greed. He pointed out that the dispute between the brothers was going to tear apart their family and rob them of any joy and peace. It was foolishness to kill relationships over stuff.

The Book of Proverbs warns that “The greedy stir up conflict” (Proverbs 28:25) and “Bring ruin to their households.” (Proverbs 15:27). This is what is happening here: brothers tearing each other apart over money.

Greed could be so powerful that it clouds our vision and make us see others as objects to be used to get more of what we crave. No surprise the 10th commandment says, “You shall not covet” (Exodus 20:17). Greed and coveting are similar, wanting more or what belongs to someone else. A person who covets is led to break all the other commandments. So be warned, greed leads to abuse; it inclines us to evil, to be wicked because it makes it impossible to love others well.

Now, this leads me to my last point and word of encouragement: Having more does not lead to a fulfilled life; generosity does. The “antivenom” against greed is generosity. If greed destroys lives and tears relationships apart, generosity heals and strengthens the bonds among people.

Here is a story from a few years ago that illustrates how generosity looks like: https://www.youtube.com/watch?v=QfF1m3-Dl_Q

This kid caught the ball. It was his to keep. He did not have to share it with anyone. But he saw a younger boy sad because he could not get it. Someone could say, “Well, the mother of the young kid should teach him he can’t win them all.” I won’t argue that. But the beauty of this story is how Ian was moved by a need and provided for it. Even if they told him to give the ball to the other kid, he could have ignored it and kept it. Instead, he gave it to the little boy and returned to his seat to enjoy the game. He made a decision and expected nothing in return. He gave the ball away with no expectation of reward.

However, after Ian gave the ball away, people were moved by his generosity and he was gifted a signed bat by his favorite player and offered to throw the first pitch at a game. Did he ask for that? Did he expect it? No, none of it. But generosity incites more generosity.

Greed could never accomplish any of that. Greed tears us apart and dries us up from the inside out; generosity transforms hearts and gives us fulfillment. Generosity is a godly behavior shown through how much of ourselves we give to others to bless them without regard for whether they deserve it or what we can gain from it. Generosity is not a business transaction but an act of love. To love is to give. As Amy Carmichael said, “You can give without loving, but you cannot love without giving.”

The greatest example of generosity is what God has done and does for us. The nature of God is to give, to be generous. Consider how God created everything and gifted it to us. The heavens with all the stars and the earth with all its life; the valleys and mountains, beaches and oceans, deserts, jungles, and glaciers. All the animals and vegetation of all shapes and sizes.

Did you know that just one handful of sand has 10,000 grains in it—and would it boggle your mind to know that there are more stars in the cosmos than grains of sand on every beach in the world? What about the food we eat? With all flavors, smells, and textures we get to enjoy. Is that a generous God or what?

But perhaps even more consequential, God is generous with our salvation and wellness. The Bible tells how Jesus related to us and how he fed and healed people. And how about how he offered himself to give us faith and life? He died on a cross because he loved us. Greed will never do that; generosity does.

That is the pattern we are invited to follow because generosity leads to godliness. When we act in generous ways, we are godly, like Jesus.

Do you love your family? Do you care for your friends? Do you want a better world for your children? Money won’t give you that; generosity will. To love is to give compassion, caring, forgiveness, empathy, service, help, support, etc. Those are the ingredients for a good and happy life.

So, I encourage you today and always to be generous with your words, time, talents, wealth, and anything else you can use to bless others.