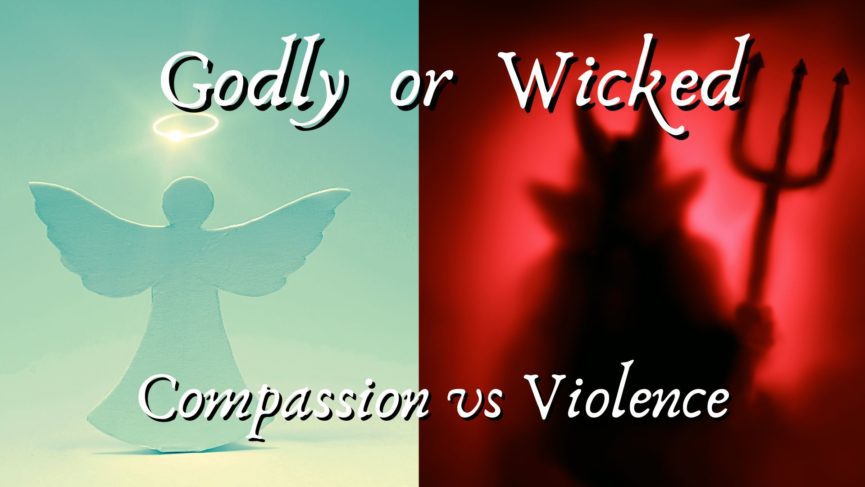 Today is the fifth and last message in the series “Godly or Wicked.” We have learned critical distinctions between what is good and evil and established a spiritual and moral framework to overcome evil behaviors and threats.

For example, we have talked about generosity vs. greed, and kindness vs. arrogance. I distinguished between what may be sinful and what is actually evil in each message. Having a lack of understanding of what is morally good or bad, making bad choices, and hurting people because we don’t know better is not necessarily evil, probably sinful, but not evil. But evil is a willful desire to hurt others without any empathy. Evil people are not greedy, arrogant, and violent because they don’t know better; instead, that is the path they have chosen, willingly rejecting any notion of God and moral constraint.

Indeed, there is a difference between acting sinfully out of ignorance versus targeted wickedness. Everyone is sinful, but there are a few who are actually evil.

Now, we all struggle with sinful behaviors like greed and arrogance, but the key to distinguishing when it is sinful or evil is that it is not defining of our character or the driving force of our nature. For example, are children aggressive or bullies sometimes? They can be, for sure. Are they evil? Absolutely not, as Jesus said, “theirs is the kingdom of heaven.”

But then, we also have witnessed evil violence, even more so recently with school shootings and stabbings, road rage assaults, domestic violence, child abuse, and people getting sucker punched in unprovoked attacks by strangers. When evil people are determined to hurt others, they will find a way to make it happen, whether with a gun, kitchen knife, vehicle, or harmful rhetoric.

So, on the one hand, we may deal with violence caused by issues like mental health, social pressures, emotional traumas, unhealthy social environments, etc. This violence might be sinful because it still hurts people, but not evil, in my opinion. But, on the other hand, we also may deal with evil violence that has no excuse or explanation and stops at nothing to get what it wants. These people smear, attack, and bring terror to whom they despise; they know it and don’t care. Instead, they justify their actions because their victims are worthless to them.

So, in the same way as in previous messages, we distinguish between sinful violence and evil violence. Today, we are learning about compassion vs. (evil) violence with this theological framework.

The question for today is: How do we respond to violence?

“Listen to another parable. There was a landowner who planted a vineyard, put a fence around it, dug a winepress in it, and built a watchtower. Then he leased it to tenants and went away. When the harvest time had come, he sent his servants to the tenants to collect his produce. But the tenants seized his servants and beat one, killed another, and stoned another. Again he sent other servants, more than the first, and they treated them in the same way. Then he sent his son to them, saying, ‘They will respect my son.’ But when the tenants saw the son, they said to themselves, ‘This is the heir; come, let us kill him and get his inheritance.’ So they seized him, threw him out of the vineyard, and killed him. Now when the owner of the vineyard comes, what will he do to those tenants?” They said to him, “He will put those wretches to a miserable death and lease the vineyard to other tenants who will give him the produce at the harvest time.”

Jesus gives this parable in the last days before he was crucified. He had just entered Jerusalem to face his enemies. During those last days, he taught about his death and resurrection, the sinfulness of people, their rejection of God, and the justice of the Kingdom of God.

Now, he spoke several parables to illustrate who he was and what was going to happen to him and the people of Israel.

In our text today, there is the parable often called “The Parable of the Wicked Tenants.” In the parable, a landowner sets up a vineyard and leases it to tenants. He generously supplied all that is necessary for the vineyard to produce a good harvest. He entrusted his land and resources to people, but they were evil. When the harvest time came, they denied the landowner of his harvest, so he sent his servants to resolve the dispute, but they abused and killed them every single time. Then, the landowner sent his son thinking, “They will respect my son.” But when the tenants saw the son, they said, “This is the heir; come, let us kill him and get his inheritance.” So they seized him, threw him out of the vineyard, and killed him.

The tenants’ behavior is not sinful; it is evil. A willful act of violence driven by greed and arrogance. They wanted to keep the land and harvest to themselves. They thought they deserved them and could take them by any means necessary. They lied, stole, and killed. All character traits of evil.

A moment of joy and celebration as it is during harvest season became a time of bloodshed and outcries of suffering.

This parable is a prophetic statement about what is going to happen to Jesus himself very soon. First, God sent prophets to his people, but the people rejected and killed them. Then God sent his Son to the world, but he was hanged and killed on a cross. They became victims of violence as the servants and son in the parable.

But here is the most relevant part for us. After Jesus tells the parable, he asks his listeners what would it be a proper response to the tenants’ actions: “Now when the owner of the vineyard comes, what will he do to those tenants?” In other words, what should the owner of the vineyard do in response to the tenants’ violence? The people answered, “He will put those wretches to a miserable death…”

They answered as if they were quoting Exodus 21:24, “Eye for eye, tooth for tooth, hand for hand, foot for foot,” suggesting that the proper response to violence is more violence.

Interestingly, Jesus responded by quoting Psalms 118, “Have you never read in the scriptures: ‘The stone that the builders rejected has become the cornerstone; this was the Lord’s doing, and it is amazing in our eyes’?” (Matthew 21: 42)

What is the meaning of this, then? This Psalm referred to Jesus’ death and resurrection. Jesus was the “stone” that was rejected. The picture of Jesus hanging on the cross is evidence of how he was violently rejected by some of the religious leaders of his time, the “builders.” However, the stone that the builders rejected became the cornerstone. Ultimately, the builders failed, and the cornerstone succeeded. In other words, Jesus says, “The actions of the evil ones will not last but will be judged. Don’t be like them. Evil is only overcome with good.”

I know it is hard dealing with evil (I have dealt with people like that a few times). We look at Jesus, and though we may be inspired to be like him, it is a hard practice to follow in his footsteps. All of us, rightly so, may want to even the score when someone willingly is hurting us. We are tempted to behave in the same way doing to them the same things they do to us. But that is the ultimate defeat when good people behave like evil people doing the things they do, using the words they use, and talking like they do. But the reality is that we can never put off a fire with more fire; we need water. I am not saying that we should allow evil people to hurt us and do nothing to stop them, or not defend ourselves, our family, or others in a situation that may warrant it. On the contrary, they must be stopped or held accountable through the proper means. What I am saying is not to become them.

So, what’s the answer to our question today of how do we respond to violence, to evil? If we pay attention to how Jesus lived and dealt with all kinds of people, he practiced compassion. Compassion is the “water” to the “fires” destroying the world. Compassion is the answer to responding to the evils we face, not necessarily for the sake of the wicked ones, but for those who are watching and learning from us, like our children.

What is compassion? Compassion alludes to kindness and sympathy. Compassion means “to feel with.” When we have compassion for someone, we try to feel what they are feeling, meet their needs, and heal their pain. Compassion may not change evil people, but it sure makes the world a more loving place that keeps people from becoming evil, making it a safer place for everyone.

Years ago, I read an inspiring thought by Lori Deschene, and I just happened to come across it again via a Facebook post by Terri Hicks. This thought captures my thoughts on the subject beautifully. It says,

The most compassionate people I know are the ones who have had their share of suffering in this world, yet they did not become bitter, resentful, or vengeful but compassionate. I am sure you know people like that; they have been kind, patient, and generous with their time and energy to support you when you were in need, perhaps even when you acted like an enemy with them, still they did not treat you like so.

So, here is the invitation and good news. Violence is never about justice but retribution. We must seek justice, but always be careful not to be overtaken by vengeance. The way to do that is by practicing compassion. Compassion is our superpower. It makes people listen to each other, look after one another, and behave in considerate ways toward those around them. Compassion, alongside love, is the most human being thing we can do for each other. And compassion is the gift that keeps on giving, for it benefits the recipients and the givers. Living a life led by compassion makes us healthier, happier, kinder, and good people.

Hear these words the apostle Paul told the Philippians 2:1-5

“If then there is any encouragement in Christ, any consolation from love, any sharing in the Spirit, any compassion and sympathy, make my joy complete: be of the same mind, having the same love, being in full accord and of one mind. Do nothing from selfish ambition or conceit, but in humility regard others as better than yourselves. Let each of you look not to your own interests, but to the interests of others. Let the same mind be in you that was in Christ Jesus…”