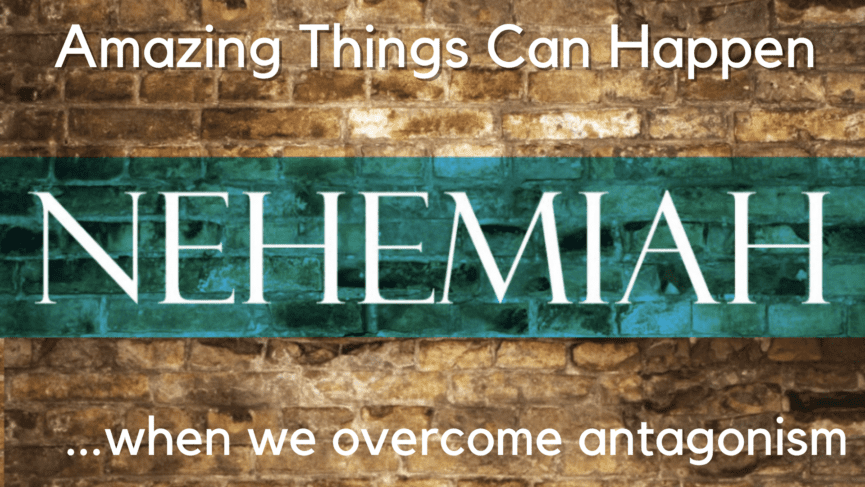 Today we are studying the fourth chapter of the book of Nehemiah for the fourth message on the series “Amazing Things Can Happen.”

Here is a quick recap of the context of the book of Nehemiah.

We have explained that the historical context of this story happened in the 5th century B.C. About 100 years before, the Babylonians conquered and destroyed Jerusalem. The walls and the city were left in rubbles, the Temple was sacked and burned, and many people were taken as slaves. However, some were allowed to return over the years, but only to discover the city was still destroyed and deserted—a terrible reality of sadness, loss, and anger.

Nehemiah had never been to Jerusalem, but when he heard reports of its condition, he requested the Persian king -whom he was serving as cupbearer- to allow him to go back to the city of his ancestors to rebuild it. He prayed for months and put together a plan, so when he made his request, he was ready to go. Once he arrived at Jerusalem, he surveyed the land and city, and called on the people to unite in the work.

This brings us to chapter 4. Here, things start to get more complicated for Nehemiah and the people. They began to experience a powerful antagonism to stop their work. This is what happened,

Now when Sanballat heard that we were building the wall, he was angry and greatly enraged, and he mocked the Jews. He said in the presence of his associates and of the army of Samaria, “What are these feeble Jews doing? Will they restore things? Will they sacrifice? Will they finish it in a day? Will they revive the stones out of the heaps of rubbish—and burned ones at that?” Tobiah the Ammonite was beside him, and he said, “That stone wall they are building—any fox going up on it would break it down!” (Nehemiah 4: 1-3)

These two men, Sanballat and Tobiah, apparently were not happy but deeply disturbed when they heard the wall of Jerusalem was being rebuilt. They were so aggravated that they were described as “angry” and “greatly enraged.”

The rebuilding of Jerusalem was an offense to them, so they tried to stop the work through intimation and mockery. They began to call Nehemiah and the rest of the people “feeble Jews,” mocking their beliefs to discourage them so they would stop the work.

Just take a look at the questions they were raising to make Nehemiah and the others doubt themselves:

What are these feeble Jews doing? Will they fortify themselves? Will they offer sacrifices? Will they complete it in a day? Will they revive the stones from the heaps of rubbish; stones that are burned?”

The purpose of these questions was to mock them and cast doubt on the project by ridiculing their efforts and faith. They were trying to make them second guess themselves and their aspirations. They attack their capacities and faith by basically saying, “What you are doing is pointless and wrong because you are wrong and your ideas are bad.”

Still, the work did not stop, and the walls of Jerusalem continued to be rebuilt as the gaps were closing. However, this triggered a threat of violence against the Jews. In verse 8, it says that “they were very angry, and all plotted together to come and fight against Jerusalem and to cause confusion in it.”

What is this, if not an insidious attempt to discourage them from doing what they knew in their hearts was right and God’s purpose for them.

Have you ever experienced anything similar? It could have been a family member, a friend, or whoever else, and they bullied you into stopping believing in yourself and your abilities. What happened to you? Did you get discouraged, doubt yourself, and stop the work?

What a shame to act in such a manner against those who are trying to do good. That is exactly what is happening here. Sanballat and Tobiah are powerful antagonistic figures in this story. They are evil critics who bring nothing but discouragement to those working for a good cause. Whether they were moved by jealousy or hate, their goal was to stop the construction of the wall.

But sometimes, no matter how strong and confident you are in what you are doing, everyone is susceptible to discouragement. Even as the people had a plan and were working together with one mind, some of them began to lose heart as verse 10 explains, “Then Judah said, “The strength of the laborers is failing, and there is so much rubbish that we are not able to build the wall.”

Did you notice what they said? “We can’t rebuild the wall.” In addition to the opposition they were facing, the work was difficult and complex (so much rubbish), and they were getting tired and discouraged.

This was a disturbing development. Judah was supposed to be the strongest and bravest tribe. Historically, it was the tribe of kings. So, hearing they were getting discouraged and tired was a major challenge and a potentially catastrophic blow to their work. If the strongest among them were beginning to lose faith and confidence in their capacity to do the work, everyone else would follow.

That was the most dangerous moment, for the only thing that could have stopped the work was if the people lost confidence in each other. This was not a battle against blood and flesh but one in their minds and hearts.

So, did they stop? After hearing Judah was about to give up, this what happened next,

After I [Nehemiah] looked these things over, I stood up and said to the nobles and the officials and the rest of the people, “Do not be afraid of them. Remember the Lord, who is great and awesome, and fight for your kin, your sons, your daughters, your wives, and your homes.” (14)

After this, an amazing thing happened: the hostile plots against them were thwarted and their enemies shrank back. All this time, their enemies did not have the power to stop the work; that is why they used intimidation. So, once the people recovered their faith, stayed together, and remembered their purpose, they overcame the antagonism. Their victory was less about defeating their enemies and much more about not losing themselves.

Do you see what is happening here? Just as the threats made them doubt and forget their purpose, remembering their faith and the gift of rebuilding the wall united them and reminded them of who they were.

What do we do to overcome antagonism, then? First, we need to ask for help when we are threatened by discouragement and fear.

Since chapter 1, we see Nehemiah seeking God and asking for help through prayer. When his enemies were mocking and threatening them with violence, he did little to engage them. Instead, he talked to God to stay focused. This means that prayer is less about what we ask for and more about what happens to us when we do it. Prayer gives us peace and clarity of thought to see what is happening and we need to do about it.

What are the challenges you are facing right now? Talk to God, pray. Start by saying whatever you want and need to say, and then ask for help. You will see the power of prayer in your life.

Second, to overcome antagonism, we need to reorganize our priorities. As we pray, we get new insights to do what we need to do. This is what Nehemiah did when he acted promptly to protect the people as the threat was increasing.

For example, verse 13 says that Nehemiah “stationed the people according to their families, with their swords, their spears, and their bows.” They were rebuilding the wall, but they were also ready to fight back if their enemies attacked them. This “reorganizing” discouraged the enemy from attacking them, and it encouraged the people because they knew they could defend themselves if need be.

To us, this is about reorganizing our lives and what matters to us. This can be a difficult practice because changing behaviors, long-held ideas, even our own character requires total commitment to change the direction of our lives. But once we do, everything begins to fall into place and gets better. If anything, antagonism makes us stronger because it bolsters our strengths and capacities and forces us to make the hard and long-overdue changes we need. This is what we call “growth.”

The last thing we need to do to overcome antagonism is not to forget God in our lives. When the people considered giving up, Nehemiah told them, “Do not be afraid of them. Remember the Lord.”

Nehemiah knew, even in the face of opposition, that the success of the wall was dependent upon people not forgetting their faith. For this reason, he reminded them God was with them. This was not only a source of security but also of inspiration: “God is with us, and we will rebuild our homes!”

This is good news! Greater is the one who is with us than anyone who is against us! God is always with us and will never leave us!

This means that instead of focusing on the threats of the enemy and the negative voices from without or within, we remember God’s words, goodness, and power, and all the right things God has already accomplished for us and the promises of what is yet to come.

So, don’t let the voices of the yet take away your life, dreams, and confidence in the gifts God has given you. Don’t let the antagonists take over you. Their threats are worthless and powerless against your faith and the presence of God in you.

So, whatever problems and challenges you may have today, know that you can ask for help, you can pray, you can change the direction of your life by reorganizing your priorities and allowing yourself to grow. But most importantly, you can remember God in your life. Since before you were born, God has been with you and has never left.

Remember God. It will help you remember who you are and what you need to do.