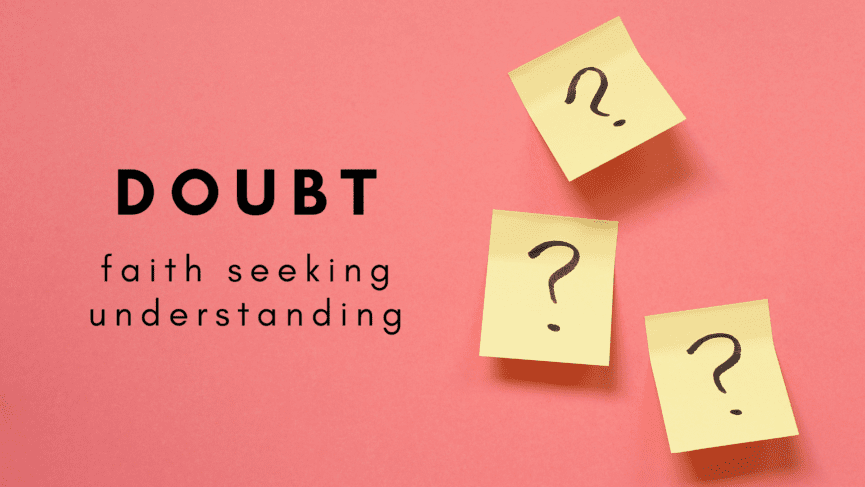 We often judge people by one mistake. We never let them forget it. Further, we never let the world forget it. We tend to forget the good as soon as something goes wrong. That is unfair and very unhelpful.

This is what happened to Thomas, one of the twelve disciples. He is not remembered for all the times he was brave and confident in his faith, but for the one time he doubted. Today, when someone is skeptical, we call that person a Doubting Thomas. Very unfair because Thomas was one of the most steadfast and loyal apostles among the Twelve. (Did you know that? How many times have we wrongly judged someone too!)

Today, we will learn from one of the bravest and honest disciples about faith and doubt and how doubt is a good thing, not a bad one.

Have you doubted what you thought you knew? Perhaps you have asked some of these questions:

Is the Bible the Word of God? Is Jesus the Son of God? Did he really rise from the dead? Am I really a Christian? Why do I still feel guilty? Why did my marriage break up? Why did my friend betray me? Where was God when my mom was sick?

These are honest questions, hard ones indeed, and have been asked by many people. I am pretty sure most of us have asked questions like these and may have felt bad for doing so because we should know better, right? But is doubting bad? Is it unbecoming of Christian character?

But Thomas (who was called the Twin), one of the twelve, was not with them when Jesus came. So the other disciples told him, “We have seen the Lord.” But he said to them, “Unless I see the mark of the nails in his hands, and put my finger in the mark of the nails and my hand in his side, I will not believe.” A week later his disciples were again in the house, and Thomas was with them. Although the doors were shut, Jesus came and stood among them and said, “Peace be with you.” Then he said to Thomas, “Put your finger here and see my hands. Reach out your hand and put it in my side. Do not doubt but believe.” Thomas answered him, “My Lord and my God!” Jesus said to him, “Have you believed because you have seen me? Blessed are those who have not seen and yet have come to believe.”

Who is Thomas, and what can we learn from him to help us in our life struggles? Let’s do a review of who Thomas is besides “Doubting Thomas.”

Thomas first steps onto the stage of biblical history in John 11. Lazarus has died in Bethany—a suburb of Jerusalem. Jesus and the disciples are in the area of Jericho when they get the word. When he decides to go to Bethany, his disciples remind him that the leaders tried to stone him to death the last time he went near Jerusalem. It would be suicidal to go back.

Jesus decides to go anyway. But the disciples were unconvinced. At that point, Thomas speaks up and says, “Let us also go, that we may die with him” (John 11:16). It is a brief statement that reveals enormous courage—this is Courageous Thomas.

Then, John’s gospel mentions Thomas one other time before the crucifixion. It is late Thursday night in the Upper Room. Jesus has just washed the disciples’ feet and given them the great command to love one another. All except Judas are gathered around Jesus, knowing the end was not far away. To them, Jesus said,

Thomas has been listening quietly, carefully, and in a moment of great honesty, he said, “Lord, we don’t know where you are going, so how can we know the way?” (John 14:5). The rest of the disciples were just as perplexed, but only Thomas dared to speak out because he wanted to understand. That is Honest Thomas.

With this, the picture we have of him on the eve of the crucifixion is this: he is a brave man, intensely loyal and deeply committed to Jesus. If need be, he is ready to lay down his own life. He is an honest and brave man. Too bad he is not remembered as Courageous or Honest Thomas but Doubting Thomas.

I think this speaks to us in meaningful ways. Often, we are stuck in our faith because we are afraid of being judged for having questions. We are scared of being labeled for having doubts. Sadly, your fears may be warranted; people do judge and assign labels when they are afraid or do not understand other people’s life experiences. But that is not how God treats us, nor is it healthy to us.

How many times have we thought less of ourselves because we had questions and doubts and thought it was wrong? Well, I have good news for you: God does not condemn your questions or doubts.

Let’s get back to the story when Thomas doubted to learn more about this.

John tells us that Thomas was not present on that Sunday evening when Jesus suddenly appeared in their midst (John 20:19-25). The Bible doesn’t say why, but I think I know.

Thomas has a broken heart. He still loves, cares, and wants to believe, but his heart is broken. He is not a bad person, nor is his doubt sinful. Some of you know that there is no doubt like the doubt of a broken heart. Thomas is not an evil skeptic; he is a wounded believer. He was not unwilling to believe but unable because his grief clouded his feelings and thoughts.

After all these years, Thomas has gotten a bad reputation. Doubting Thomas, we call him. Is it fair to call him that? We tend to look down on him. But not Jesus. Eight days later, Jesus appeared to the disciples a second time. This time Thomas was with them. Jesus speaks to him as to one whose faith is weak, not to one who has an evil heart. He said, “Put your finger here; see my hands. Reach out your hand and put it into my side. Stop doubting and believe” (John 20:27).

Jesus knew all about Thomas’ doubts. He knew he was heartbroken. Jesus didn’t put him down; instead, he said, “Go ahead. See for yourself. Stop doubting and believe.” Jesus did not condemn Thomas for his doubts. Jesus spoke to him as a sincere disciple whose faith was struggling, not as one with an evil heart.

Jesus gave back to Thomas the gift of faith, and Thomas’ answer was immediate: he fell to the ground at Jesus’ feet and exclaimed with a warm, passionate cry of joy, “My Lord and my God!”

Here we have a doubter attaining the fullest and firmest belief because he asked to understand. And this happens very often where those who asked the toughest questions become the strongest believers because they refuse a “pretending faith,” and instead, they seek understanding.

Tertullian, a Theologian from the early church, said about Christians, “No man would be willing to die unless he knew he had the truth.” He meant that as the early Christians were being persecuted and killed because of their faith, they would not have died for a dream. They would not have been loyal to a figment of their imagination. Likewise, Thomas was willing to die many times alongside Jesus because his faith was unhesitant; when he doubted, he was not an unbeliever, he was seeking understanding.

What does all this mean to us? Many people think doubt is the opposite of faith, but it isn’t. Doubt is not refusing, rejecting, or denying faith but seeking understanding. Many people think doubt is unforgivable, but it isn’t. God doesn’t condemn us when we have questions about life or faith, or anything else. Both Job and David repeatedly questioned God, but they were not condemned. God is big enough to handle all our doubts and all our questions. Many people have been taught that struggling with doubts means we lack faith, but that’s not true. Struggling with doubt is a sure sign that we truly have faith. Doubt doesn’t come from a place of unbelief but from believing and trying to understand more. If we never struggle with questions, our faith will never mature and grow stronger.

I invite you to build your life and faith on what you already have and know and then continue to grow as you understand more of what you don’t know yet.

God never turns an honest doubter away. Never. Come to God with your doubts, your skepticism, your hard questions, your sincere uncertainties. God welcomes you just the way you are—always.