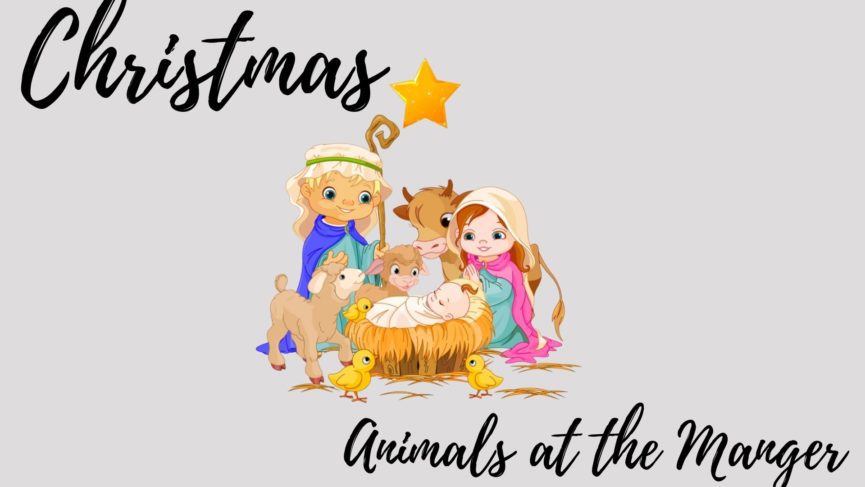 This year, we are going to observe the seasons of Advent and Christmas through the characters of the Christmas story: the animals, the angels, the shepherds, Mary and Joseph, Jesus, of course, the star, and last, the wise men. Each one of these characters has much to teach us about God and our faith.

Today is the first Sunday of Advent, and we will begin by learning about the animals and the role they play in the Bible and our lives. The Christmas story is a great place to start.

In those days a decree went out from Emperor Augustus that all the world should be registered. This was the first registration and was taken while Quirinius was governor of Syria. All went to their own towns to be registered. Joseph also went from the town of Nazareth in Galilee to Judea, to the city of David called Bethlehem, because he was descended from the house and family of David. He went to be registered with Mary, to whom he was engaged and who was expecting a child. While they were there, the time came for her to deliver her child. And she gave birth to her firstborn son and wrapped him in bands of cloth, and laid him in a manger, because there was no place for them in the inn.

In that region there were shepherds living in the fields, keeping watch over their flock by night. Then an angel of the Lord stood before them, and the glory of the Lord shone around them, and they were terrified. But the angel said to them, “Do not be afraid; for see—I am bringing you good news of great joy for all the people: to you is born this day in the city of David a Savior, who is the Messiah, the Lord. This will be a sign for you: you will find a child wrapped in bands of cloth and lying in a manger.” And suddenly there was with the angel a multitude of the heavenly host, praising God and saying,

“Glory to God in the highest heaven, and on earth peace among those whom he favors!”

When the angels had left them and gone into heaven, the shepherds said to one another, “Let us go now to Bethlehem and see this thing that has taken place, which the Lord has made known to us.” So they went with haste and found Mary and Joseph, and the child lying in the manger. When they saw this, they made known what had been told them about this child; and all who heard it were amazed at what the shepherds told them. But Mary treasured all these words and pondered them in her heart. The shepherds returned, glorifying and praising God for all they had heard and seen, as it had been told them.

This reading is the story of the first Christmas. Here, we learn about Mary and Joseph traveling to Bethlehem to register for a census. During this trip, their baby was born in Bethlehem. Since everyone was coming to town due to the census, Joseph and Mary could not find a place to stay but a stable with animals. That is where baby Jesus was born, as it says, “And she gave birth to her firstborn son and wrapped him in bands of cloth, and laid him in a manger, because there was no place for them in the inn.”

What does this story teach us about animals? When we think about the Christmas story, most people think of Mary and Joseph, the angels, shepherds, and wise men—even the star of Bethlehem. These characters dominate the picture around the birth the Jesus. If anyone thinks about the animals, we would do so to a lesser degree.

But animals play a significant role in the most incredible story ever told. They could not sing or talk of it; their inability to speak leaves them the most neglected creatures connected with the Christmas story, but they also rejoiced in the birth of the promised savior. It is the apostle Paul who said that the whole creation is crying out to be saved and restored too just as we humans are. (Romans 8:22) So, those in the animal kingdom, can also experience the joy of the presence of God.

For this reason, at his birth, Jesus identified himself with the animal kingdom. He was born in a stable meant for the shelter of animals. He was laid in a manger meant for the feeding of animals. The first sounds baby Jesus heard were the sounds of animals (what kind of sounds could he have heard?).

Furthermore, Mary and Joseph traveled to Bethlehem riding on a donkey. Jesus’ birth was first announced to the shepherds whose whole life revolved around their animals’ care, feeding, and protection. And, the wise men, making their journey to worship him on animals—traditional thought as camels.

As we can see, it is impossible to have the story of Christmas without the animals. This is because the story of humanity can’t be told without them. We see this from the beginning with Adam and Eve having a perfect relationship with animals and even naming them all; with Noah and the ark God saving people and animals together; with Abraham and his generations having animals for their wealth; with the Exodus, where animals were included in the greatest deliverance of Israel; with Moses and David being shepherds when God called them; and with the deliverance of Nineveh, because of their repentance, God having compassion not only on the people but on the animals too—everyone was saved.

This list could be greatly expanded, but the point is, people in the Bible lived with animals and their livelihood depended on them, and, in many instances, they were their caregivers too.

In the Bible, you can’t separate the story of humans and animals and that is a fascinating thought to keep in mind. And there is no greater story of the animal kingdom connected to humanity than the story of Christmas. The promised Messiah, Jesus, was born among the animals and had his dwelling with them first. We can say God wanted to honor the animal kingdom through the birth of his Son. So, Jesus came not just for us but also for them.

Sadly, the emphasis on animals in the Christmas story is not often highlighted today because most people no longer live with animals and no longer see them as partners in creation. For many of us, this may be a foreign concept since we live detached from animals. We have gotten so disconnected from the sacredness of being nurtured, cared for, and fed by animals that we think fish, meat, milk, and eggs come from the grocery store. Instead, we objectify them and keep them as trophies. For this reason, we often struggle to appreciate the value and significance of the animal kingdom God created. We forget that they sustain our existence in more than one way—except the mosquitos, “God, bring fire upon them, please, posthaste!”

As I study this, I believe animals are more special than I can imagine. At least I know that without them, we could not survive. They serve us, nourish us, give us companionship, and so much more. They even make the stories we tell more interesting. For example, we have the turkey for Thanksgiving, the rabbit for Easter, the donkey for Palm Sunday, the eagle for July 4th, and even Santa has his reindeer, Rudolf the red-nosed reindeer (Santa would be a helpless pedestrian without him).

So, what should we take from this? How should we think of animals and their story in creation?

One of the most amazing descriptions about the birth of Jesus that beautifully includes the animal kingdom is from the prophet Isaiah.

In Isaiah chapter 11, the prophet describes how God plans to establish his kingdom among people and animals through the birth of Jesus. This text helps us answer our questions of what all this means to us (selected verses),

The wolf shall live with the lamb,
the leopard shall lie down with the kid,
the calf and the lion together,
and a little child shall lead them.
The cow and the bear shall feed,
their young shall lie down together;
and the lion shall eat grass like the bull.
The nursing child shall play over the hole of the cobra,
and the toddler shall put its hand on the serpents’ nest.
They will not hurt or destroy
on all my holy mountain;
for the earth will be full of the knowledge of the Lord
as the waters cover the sea.

By reading this and considering its meaning, we can easily capture God’s plan for all of us. Since the beginning with Adam and Eve, God intended our existence to be in harmony with animals. And now, in the Christmas story, we begin to see a glimpse of this. There, we see the baby Jesus being born among animals as a symbol of what this baby will do not only for us but also for them.

The Christmas story is a full circle story of redemption and salvation for all of God’s creation. This means God wants to reconcile us not only to Godself but all creation to each other as one big family.

Therefore, our compassion and kindness should not only be directed to people but also to animals. If the salvation Jesus brought was not exclusive to humanity but included all creation, it means we need to be good stewards of the animal kingdom too. Animals are not mere incidental props in our story as humans but a genuine part of the plan of God. Every animal is part of the Christmas story, and every animal will be a part of the new heaven and the new earth when Jesus comes in final victory for his whole creation.